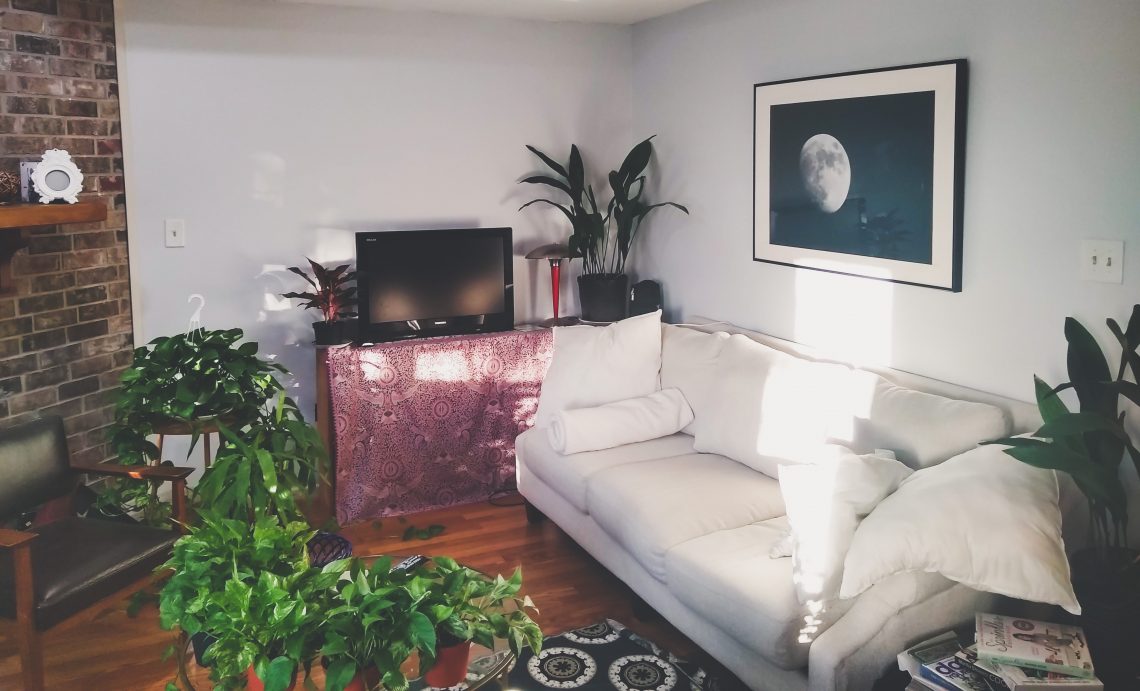 Recently, (as in eleven months ago when I wrote the first draft of this post, hello 2020) I was taken by surprise by how much my new to me sofa (shown in the lede image) made me happy. I think I was more giddy about it than I was when I signed the papers for the house I bought to put the sofa in. It’s just a sofa but then it’s also not. It’s a symbol of where I was and where I’d like to be in a really big way.

Let me take you back to the Winter of 2017. I was entering, what I wasn’t aware of at the time, a depressive episode. Depression runs in my family, but up to that point I had been lucky enough to have avoided having to endure that particular genetic predisposition. Sadness I was fine with and I had the blues before but this was something completely different. At that time it seemed like I was disconnected from the world and everything felt heavy. I talked with my doctor about it, telling her I was concerned because I wasn’t seeing things the way I used to see them and I felt overwhelmed and unfilled about life in general; that this wasn’t like me at all. Nothing I did was getting me out of what I realized wasn’t just a momentary funk. After some conversation she said that I was showing signs of depression. She commended my efforts to stave off the effects but that maybe I needed to try something else.

She guided me through some options both medical and lifestyle. We both agreed my frustration with my job was contributing a lot to how I was feeling. She advised I quit which is obviously easier said than done. So to take control where I could she also recommended I start paying attention to my home. It wasn’t enough that I kept it clean and paid the utility bills and mortgage each month. “You sound like you’re a stranger in your own home. You need to make it yours.” It was advice I had heard before but had forgotten about.

Frustration with my home has been there since about day one. I knew I wouldn’t be able to decorate it right away when I first bought the place as there were some real practical things that needed to be addressed first like updating appliances. I was starting anew with no real furniture. After college I moved back home with my parents and gave most of what I had to friends when they started setting out on their own. Just to have the basic necessities I bought  a simple bed frame and mattress, a second hand sofa, and brought along the few smaller furniture pieces I still had.

Three years later I have come out of the depression and along the way made real progress with my home. Creating a space where I could be happy played a very crucial role in my recovery. If you might be having a hard time like I was, perhaps making a change to your surroundings, big or small, may help you improve your mood and outlook. There’s no magic solution but I do believe that what we surround ourselves with, our things, the types of energy spaces can create, can and do have an impact with how we see and move about in the world. Designing a space you like living in isn’t a replacement for medical intervention when you’re depressed, but it was one of the tools of the many at work that worked very well for me
My home is still a work in progress (and so am I) and I’ll be sharing that journey here with you.

Has anything you’ve done for your home, no matter how big or small, make you feel so damn good and it took you by surprise? Let me know! Tell me in the comments or shout me out on Twitter.